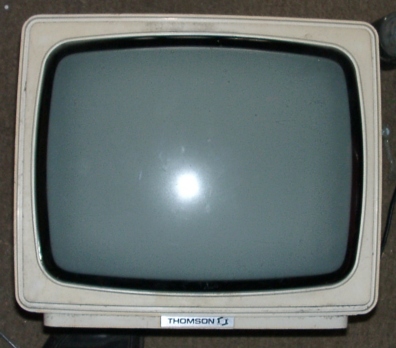 
Lots of people encounter difficulties when time to replay with an old PONG system has come. The problem comes when an old PONG system must be connected to a recent TV set equiped with numeric tuner, or not accepting PAL or NTSC standards.

If your TV set has a composite video input, your eternal problems will be gone forever. As a matter of fact, a simple and economic solution allows you to connect nearly any PONG system on a composite input. Obviously, this requires that you open your system and connect two wires. In other words, this manipulation, be it very simple, is to be done by experienced users.

Before all, let's see the systems which can be modified. There are two type of systems: those delivering an NTSC video signal, and those delivering a PAL signal. The difference is the vertical refresh frequency: 60 hertz in NTSC, else 50 hertz. You will have guessed the problem: if your TV set has a composite input, it also has to support a 60 hertz frequency (this for the european and other PAL models), or 50 herts (for the US TV sets). But don't worry, the majority of nowadays TV sets accept worth, and some can even be manually set to support the desired frequency.

The first step is to study the composite input. The previous picture shows a SCART plug, commonly known as PERITEL in Europe. Other inputs are simple two-wire plugs, the central one being the input, and the external being the ground. If you want to connect your PONG system through a SCART plug, follow these instructions: you have to connect three wires. Two grounds must be connected to the ground of your PONG system. The third wire is the video signal wire, and it is this wire that must connect from your TV set to the input of the video (RF) modulator of your PONG system.

This RF modulator is usually put into a metallit case. Sometimes, it contains a little printed circuit board, and sometimes it is just a metallit protection, the modulator being directly put on the mother board of the system.

Talking about ground wires, the best is to connect the wire cable(s) to the metallic case of the RF modulator. You will have to locate the input of this modulator, and it is this input that you need to connect to the input of your TV set (this input is in fact the composite input of the RF modulator, hence the possibility of using it to redirect the composite signal to the TV set through its composite input). This is maybe the hardest step of the whole manipulation, but most of the time, it is rather simple since most of the RF modulators have a very few connections. The typical way of finding the input is to try each connection until a picture appears on the TV screen. By security, the power supply of the RF modulator should be found first to prevent a possible damage to the TV set, though there are <u>very</u> little chance that the TV set be damaged since the voltages in a POGN system are still acceptable by the TV set for a short time.

Once the wires are connected to the composite input of the TV set, the only thing to do is keep your set on the AUX channel, and play with your old PONG system with a picture now having a much higher quality than the one that would have stayed in your mind for long.

For the moment, only one PONG system has been found with a direct composite output. The reason is simple: the switch box of this system included an RF modulator, hence the possibility of using this particular system either on a composite monitor, or a normal TV set. A nice feature for 1976 !

Excepted this system which made us discover the previous manipulation, the following systems were tested and wokred on a composite input: Odyssey, Odyssey 100, 200 and 400. For all these consoles, the manipulation was extremely simple: the composite video input of the RF modulator was labeled on the printed circuit board ! Same for the other Odyssey 300, 500, 2000, 3000 and 4000...

For those who still cannot profit of this manipulation, there's the last chance consisting in set the TV on the good channel as in the past. If the PONG system is a black and white version, there are some chances that the PONG system (be it PAL or NTSC) be usable on any TV set, since the black and white picture is encoded the same way in PAL and NTSC. But people willing to play with NTSC PONG systems on PAL TV sets (and vice-versa) must ensure that their TV can support the 50Hz or 60Hz refresh rate.